Kerry Taylor joined Sotheby’s in 1979, at age twenty and went on to become one of the youngest auctioneers in their history. After creating and managing the Collector’s Department at Sotheby’s Chester, she moved to Sotheby’s New Bond Street in 1986 where she re-established the Costume and Textile sales. Kerry later became Director in charge of all Collector’s areas, special theme sales and celebrity sales.

In November 2003, Kerry left Sotheby’s to set up her own independent auction house specialising in the costume and textiles that she has always loved. Kerry also works as Textile Consultant to Sotheby’s, advising their international network of offices and regularly assists museums with valuations and applications for funding.

Since Kerry Taylor Auctions was established, it has handled the collections of the Honorable Daphne Guinness, supermodel Jerry Hall, and the Leslie Caron collection of Haute Couture. Kerry has continued to auction major pieces of costume and textiles, including the robe designed by Matisse for Diaghilev's Ballets Russes and a Catherine Walker gown worn by Diana, Princess of Wales in 1988. 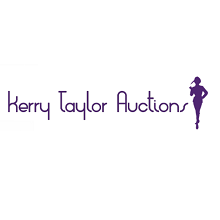