As a rule, items can be purchased at auction by participating in the auction in Auctionata’s auction room. The customer may participate in an auction in person through his presence in the Auctionata auction room, (although the number of participants may be limited by Auctionata,) or may be represented at the auction. The customer may also participate in the auction via means of communication such as letter, fax, telephone, email, or his user account on the Auctionata website.
Online absentee bids, written purchase orders and bids by telephone shall constitute a commissioning of Auctionata by the customer to place bids on his behalf and to enter into a purchase agreement with Auctionata if he places the winning bid. In this respect, the customer authorizes Auctionata to place bids on his behalf and to enter into the purchase agreement resulting from the winning bid. In this respect, Auctionata is granted an exception from the provision of Section 181 of the German Civil Code (BGB) by the customer.

Only verified customers are allowed to participate in an auction.

In order to set up a user account, the following data must be provided truthfully by the customer: 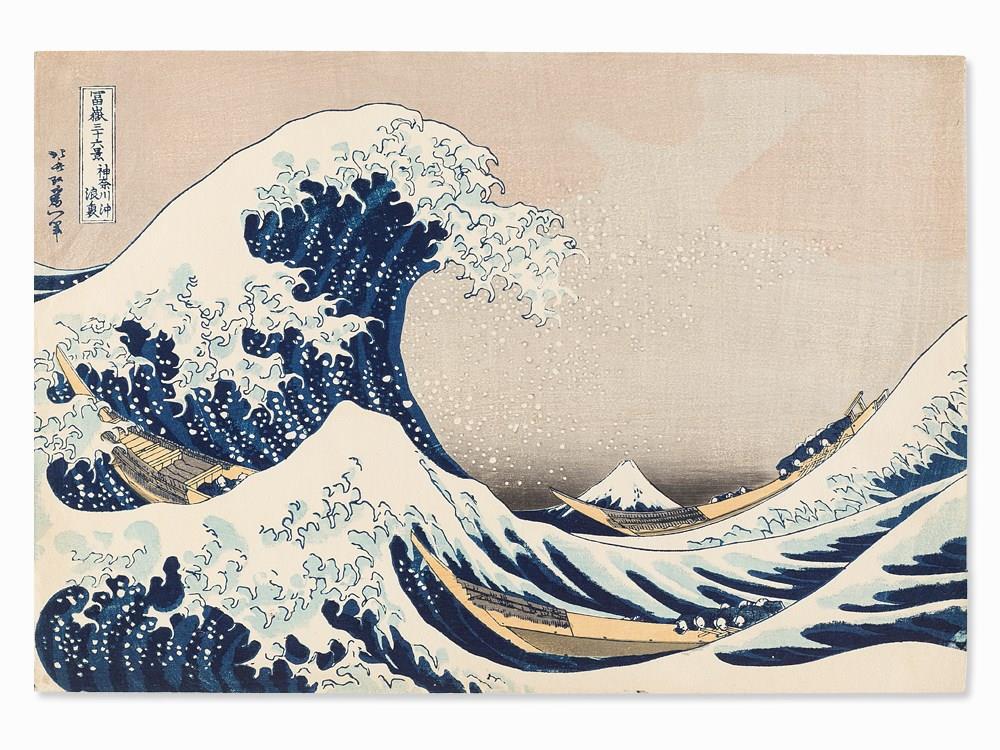 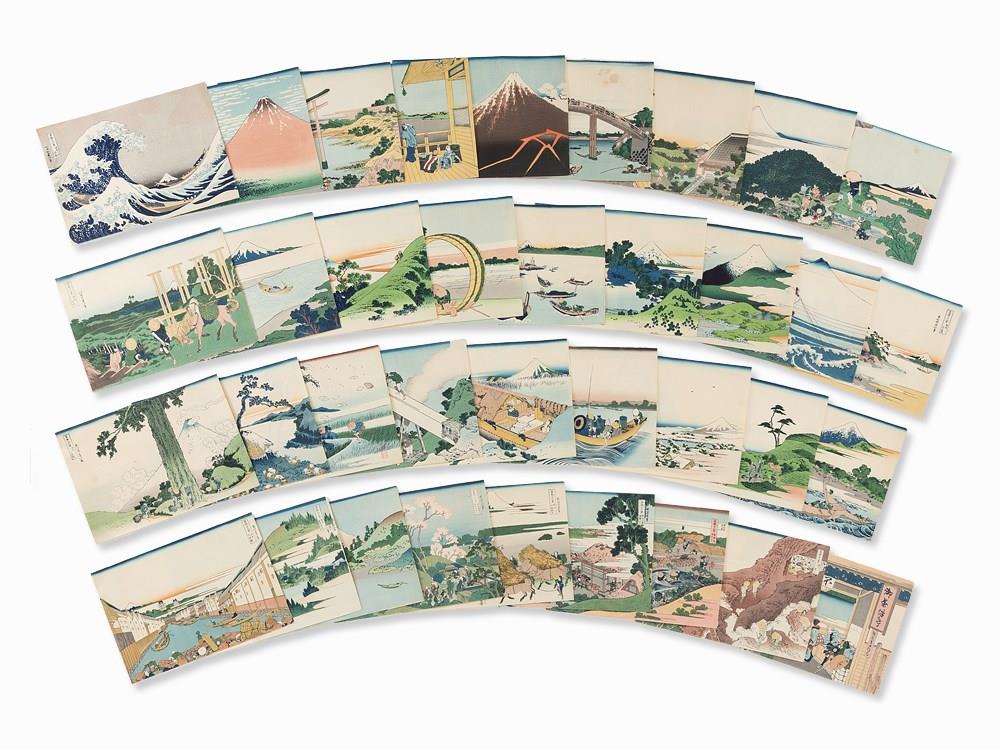 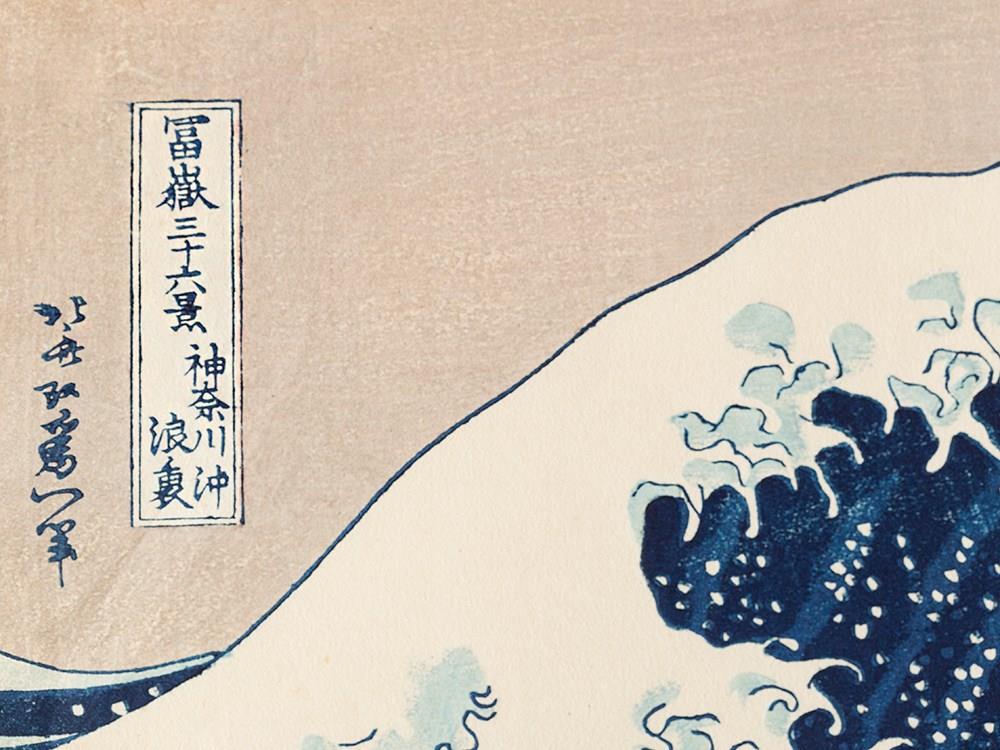 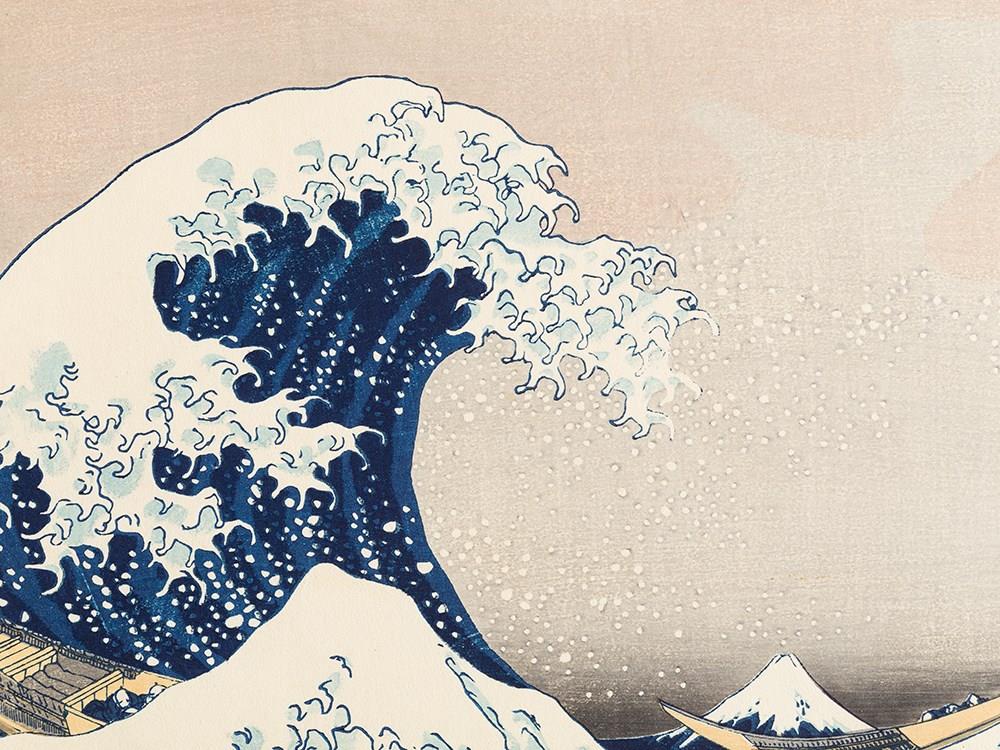 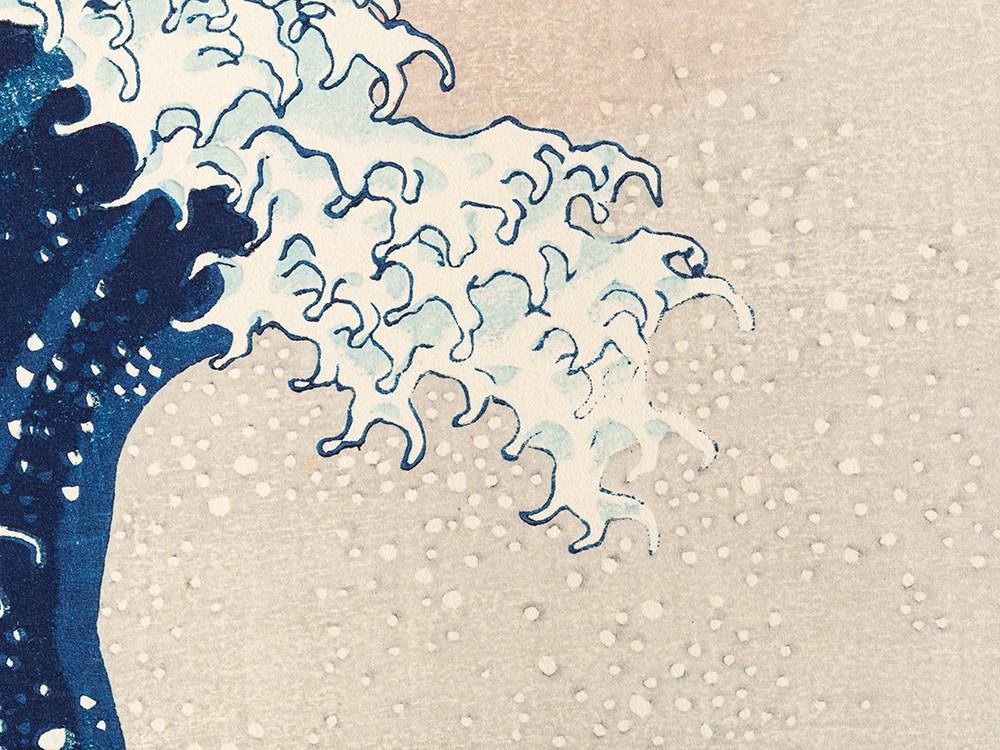 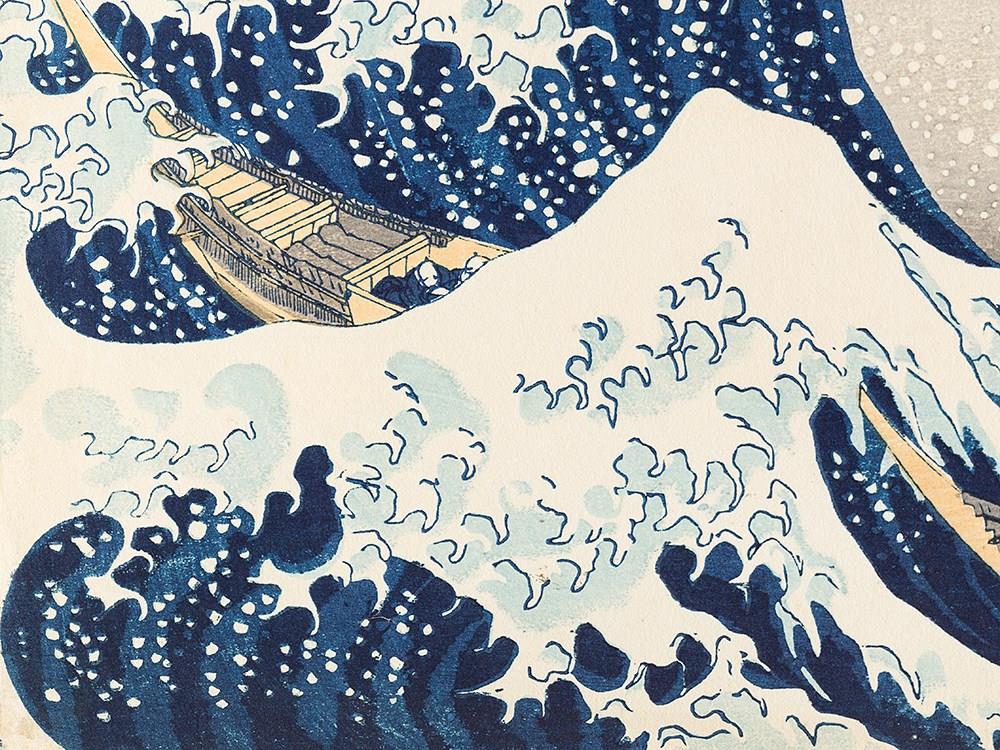 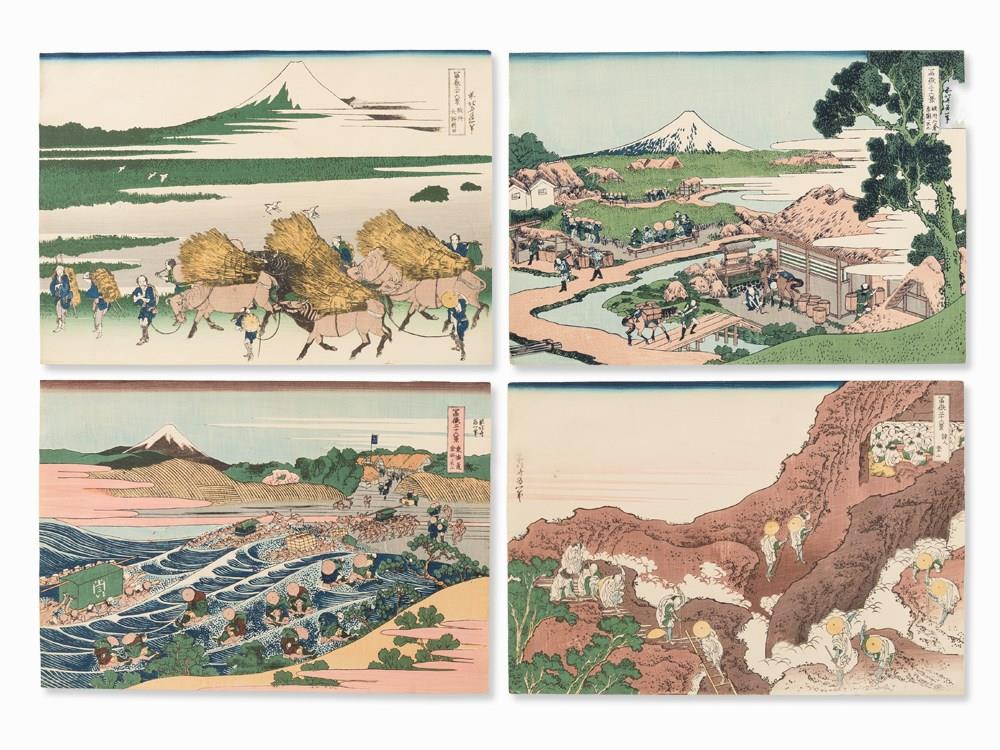 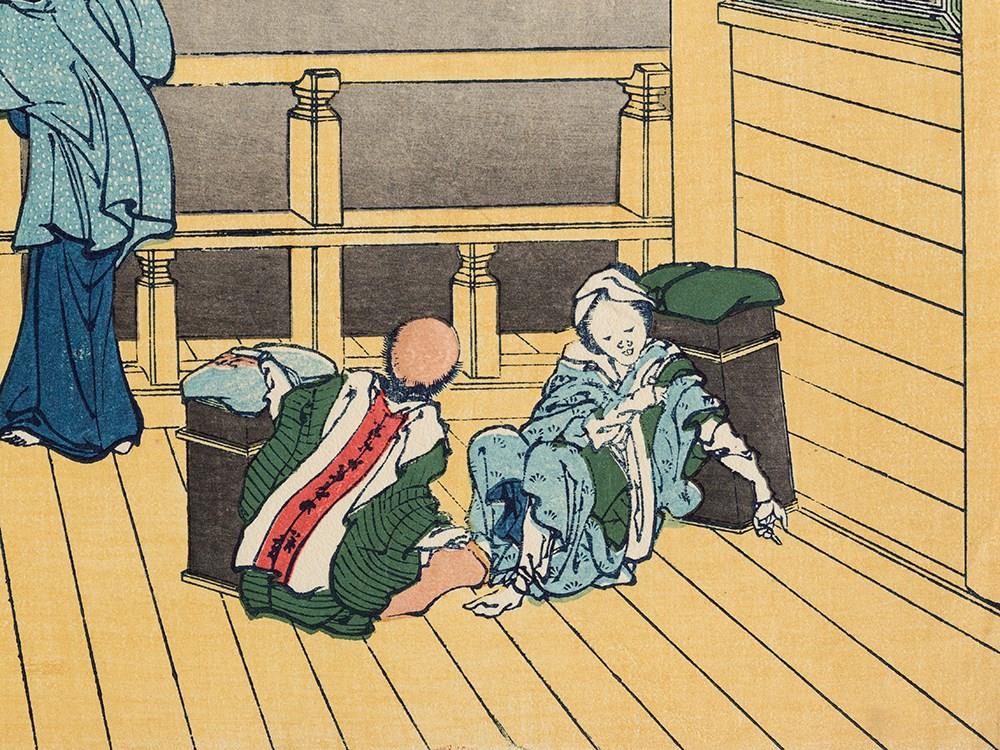 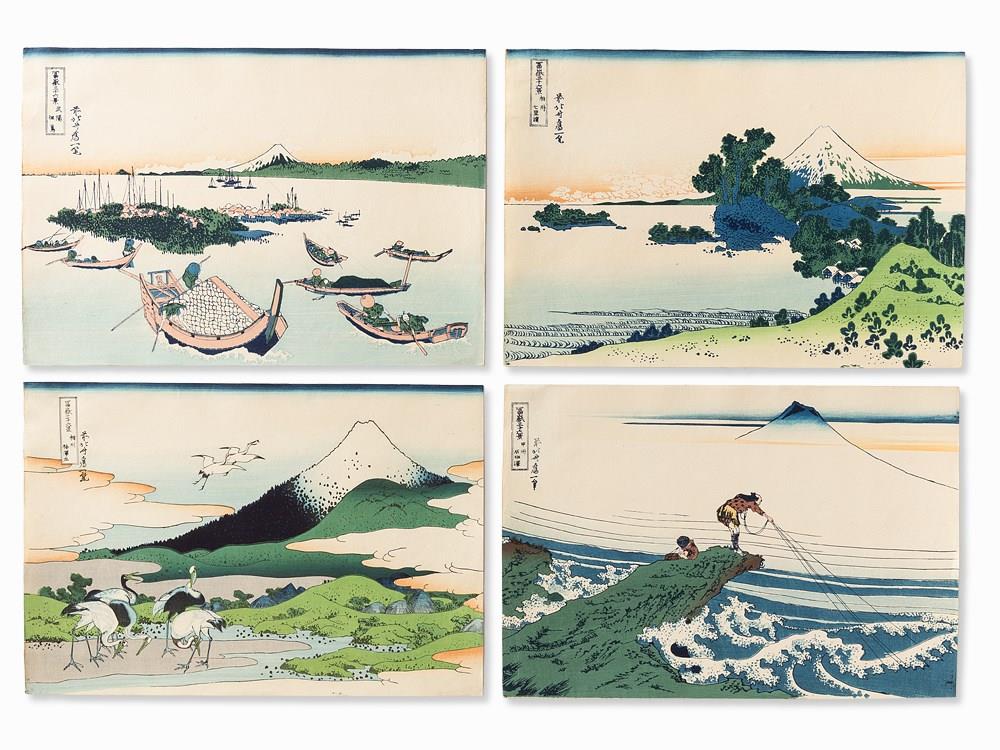 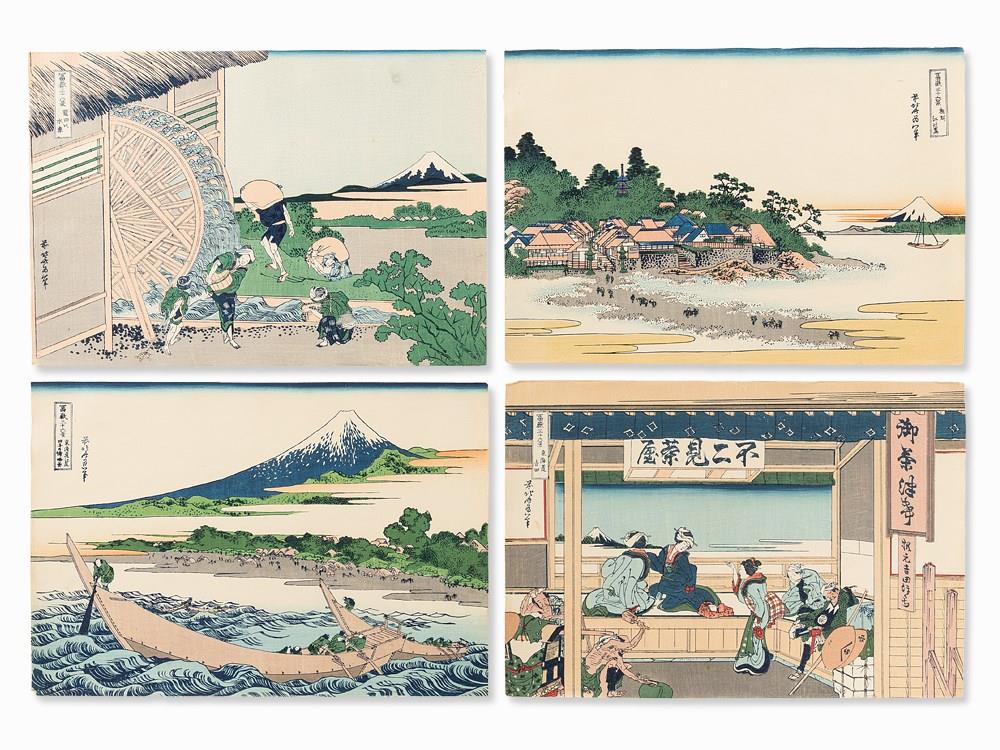 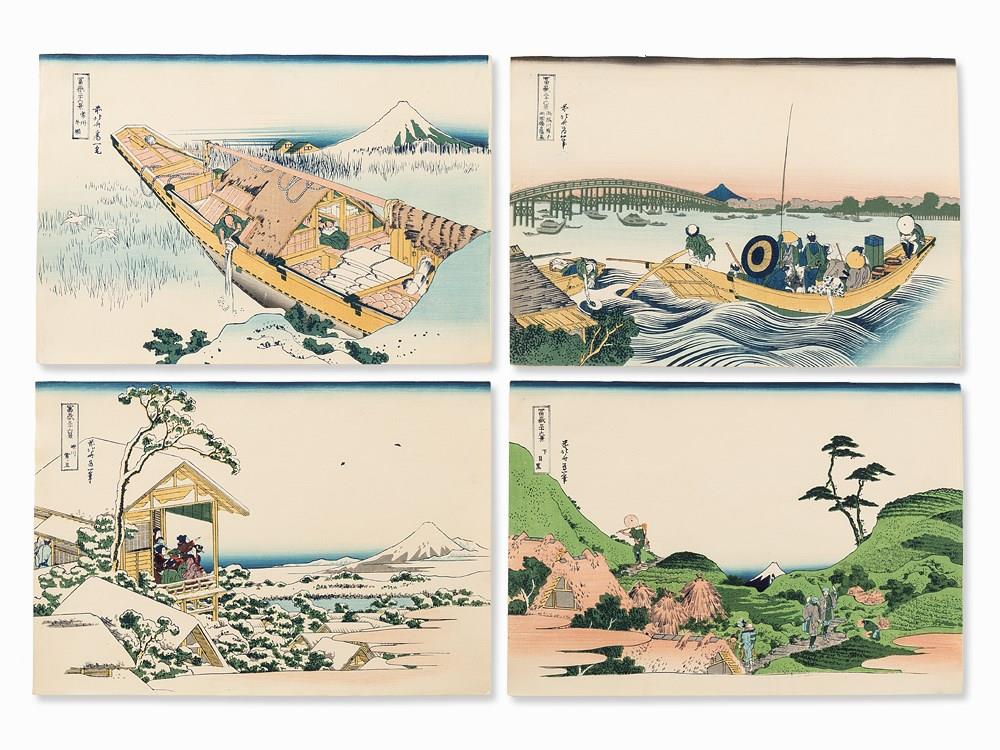 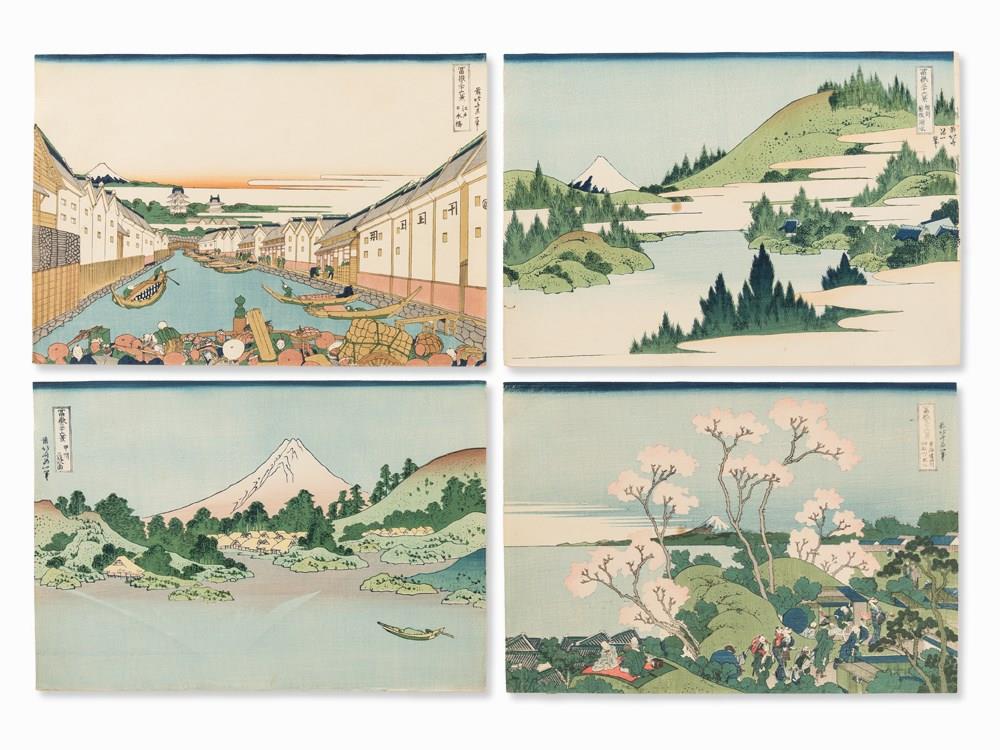 The 36 views of the mount fuji is the most famous Japanese woodblock print series and comes from the hand of the artist HOKUSAI Katsushika. 'The Great Wave of Kanagawa' and the ‘Red Fuji’ are also a part of this series, which was created in the 1830, and especially well-known in the western world. Each piece depicts the mountain Mount Fuji (omote Fuji), mostly with the view from the capital city Edo, now Tokyo. In 1831/32 additional 10 copies were published so that the series comprises a total of 46 sheets. These views show the mountain from the back side (ura Fuji).

In 1829 Hokusai was almost 70 years old when he made the first sketches for this series and it seemed that it seems that he was aware of the meaning of the images. In the preface to hisEhon ‘The Hundred Views of Mount Fuji’ he wrote that nothing has to be mentioned in his 70 years of life before the appearance of the ‘36 Views of Mount Fuji’.

Included are the works with the folowing titel:
1. Title: ‘The Great Wave of Kanagawa’ – 神奈川沖浪裏 (Kanagawa-oki nami-ura)

18. Title: ‘Mount Fuji from the mountains of Tōtōmi’ – 遠江山中(Totomi sanchu)

22. Title: ‘Tea house at Koishikawa. The morning after a snowfall’ – 礫川雪の旦 (Koishikawa yuki no ashita)

Although the proper academic reading of the character 登 is nobo (ru), however this place is not called Noboto but Nobuto and now belongs to the city of Chiba southeast of Tokyo.

35. Title: ‘The Fuji from Kanaya on the Tōkaidō’ – 東海道金谷の不二 (Tokaido Kanaya no Fuji)

KATSUSHIKA Hokusai (1760 - 1849)
KATSUSHIKA Hokusai, one of the most important representatives of the Ukiyo-e genre, became renowned for his independent style, which is exhibited in the famous woodblock print series ‘Thirty-Six Views of Mount Fuji’. In his younger years, at the age of 18, he learned and perfected the art of color woodblock printing, working in a workshop with the Ukiyo-e master Katsukawa Shunshō, founder of the Katsukawa School. Hokusai’s first works, which are characterized by the delicate personal features of the sitters, date back to the year 1779. Due to Japan’s isolation from the outside world, Hokusai's art was at first only distributed within his home country. In the mid-19th century Dutch merchants brought his works to Europe, where they became a source of inspiration for various artists and movements, such as the Art Nouveau.

竞价区间 加价幅度
0
5
100
10
400
50
1,000
100
2,000
200
4,000
500
10,000
1,000
20,000
2,000
40,000
5,000
100,000
1,000
200,000
20,000
400,000
50,000
1,000,000
100,000
+
The packaging and shipping fees depend on the item’s size, weight and shipping address – whereby the shipping address depends on whether it is within Germany, the EU or Europe (non-EU countries), or international. Unless expressly agreed otherwise in writing, Auctionata will ship the sold items to the purchaser and the purchaser will pay the costs of shipping and shipping insurance in accordance with figure 8.2.
Auctionata may knock down an item as "Conditional Knockdown" when the highest bid for an item is below a possibly prescribed minimum selling price by the consignor
("Reserve"). A "Conditional Knockdown" item does not constitute a knockdown under section 7.1 of the general terms and conditions, but the effectiveness of the contract
depends on the approval of the sale by the consignor within a period of 8 (eight) days after the auction. During this period, the bidder is bound to his bid; if the consignor so
agrees, a purchase contract is concluded for the hammer price. If the consignor does not consent to the sale at the hammer price within the above mentioned deadline, no
effective purchase contract will be concluded. In this case, the highest bidder will be informed of the failure to conclude a sales contract. Where a minimum selling price in
relation to an item was determined by the consignor, Auctionata separately characterizes the goods at the beginning of the auction on the respective item page with the text
message "Reserve".

Shopping on Auctionata is confidential and secure. We offer you
the option of paying by credit card, PayPal or bank transfer. Your
personal details will be encrypted and handled securely.